The Question of Morality 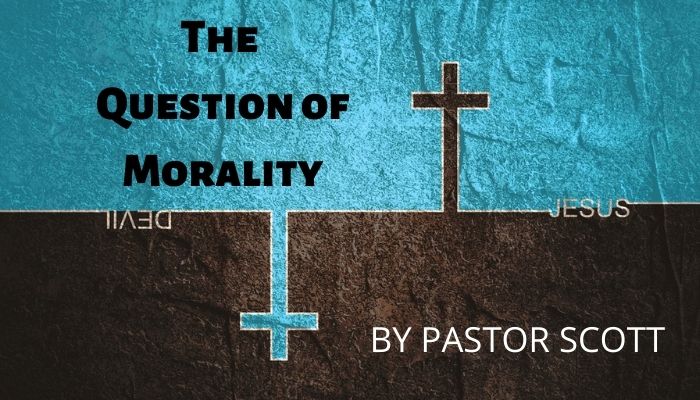 “We have been called on to live differently than the world around us. We are called to be in it without being like it.”

If you are looking up the definition of morality you will find that it refers to the set of standards that enable people to live cooperatively in groups. Morals are what society determines to be “right” and “acceptable.”

It seems that morality isn’t fixed. What is considered acceptable in your culture might not be acceptable in another culture. Geographical regions, religion, family, and life experiences all influence morals. Even scholars do not agree on exactly how morals are developed. However, there are several theories that have gained attention over the years:

Sigmund Freud suggested moral development occurred as a person’s ability to set aside their selfish needs were replaced by the values of important socializing agents (such as a person’s parents). Jean Piaget focused on the social-cognitive and social-emotional perspective of development and theorized that moral development unfolds over time, in certain stages as children learn to adopt certain moral behaviors for their own sake—rather than just abide by moral codes because they do not want to get into trouble.

B.F. Skinner focused on the power of external forces that shaped an individual’s development. For example, a child who receives praise for being kind may treat someone else with kindness out of a desire to receive more positive attention in the future.

So what is “right” and “acceptable” in our society today? It is amazing to me how over the years of my life how things have changed as to what people feel is acceptable and what is not. While the bulk of the population once viewed certain behaviors as “wrong,” the vast majority of the population now find these same activities to be “acceptable.”

Case and point: Using the Lord’s name in vain.
The first time I truly came to notice the name of “Jesus” used in what I would call a pointless or vulgar way was when I worked at the Paper Mill. God’s name was used in vain all the time by some workers, and it really disturbed me, especially as I grew in my faith and knowledge and became more and more convinced of the goodness of God.

Paul writes, “that you put off, concerning your former conduct, the old man which grows corrupt according to the deceitful lusts, and be renewed in the spirit of your mind, and that you put on the new man which was created according to God, in true righteousness and holiness.” (Ephesians 4:22–24)

Paul’s words are a reminder of where ungodly pursuits lead. Jesus taught that whatever could lead us toward sin is dangerous. If we let our sinful human nature reign and reject Christ, we remain under God’s judgment. Matthew 5:29 says, “If your right eye causes you to sin, pluck it out and cast it from you; for it is more profitable for you that one of your members perish, than for your whole body to be cast into hell.”

It is a little scary, but it seems as though spiritual amputation is the answer if we want to honor Christ by living according to His standards. We live in a world where morality and what is right or wrong can be confusing, but as Christ-followers, we have been given both an external guide in Scripture and an internal guide through the Holy Spirit on how we are to live. We have been called on to live differently than the world around us. We are called to be in it without being like it. When we stand in the light of Jesus as our standard of morality, it is easy to see where we fall short. Jesus was able to sit with sinners and not sin. He reached out to tax collectors, prostitutes, thieves, and murderers with great compassion and without compromise.

While we should have high expectations of ourselves and our brothers and sisters in the Lord, we can’t expect those around us who don’t know Christ to behave as we do. And when we require that same moral standard of those who don’t know Christ, even with the best intentions, we may be creating a barrier to them coming to know Him.

Jesus gives us everything we need to know about putting morality into practice in this sinful world. He has promised that we will not be tempted beyond what we can handle in His strength. In Jesus’ name. Amen.